by Samantha Scheinfeld - in Faith Organizations

Hailing from a family of Cantors, Perlman attended a Jewish educational institution called a Yeshiva, where he was ordained as a Cantor, or leader of prayer. Unsure about devoting himself to his faith full time, Perlman began his career as a radio program director and talk show host, opening the first Bassett Furniture Gallery in the United States along the way. As Perlman described it, he “was trying to do everything and anything but become a member of the clergy.” Even so, Perlman continued doing cantorial work part time, assisting synagogues with their High Holy Day services each year, until a call from his brother altered the course of his life.

With two days to spare before Rosh Hashana, Perlman canceled his plans and traveled up the coast. He arrived in Bath to warnings from a congregant; his 92 year old father, known to yell at every Rabbi and Cantor who took the stage, was sitting in the front row.

Perlman took the warning in stride and began the service, chanting in the High Holy Day melody he’d been taught. Though he expected heckling, the man in the front row remained quiet. By the time the service ended and the 92 year old man, Mr. Simon, approached, Perlman had forgotten the son’s warning. Simon praised Perlman’s cantorial work, declaring it was the first time he heard a Cantor or Rabbi chant the prayers correctly since his own bar mitzvah, eight decades prior. It was a moment of clarity for Perlman. He realized not only had he been trained properly, but that prayer was not just a family business but a family calling. In that moment, Perlman decided to join the clergy full time and began looking for a synagogue.

“If I can make the world that much better… then I feel like I’ve accomplished something… that’s my goal of the day.”

After serving as Rabbi and Cantor in Warwick, Rhode Island for 17 years, Perlman joined Temple Ner Tamid in 2016. As a spiritual leader, Perlman balances a variety of duties, from leading services and organizing holy days to teaching students and counseling couples as they embark on marriage. A big part of his role, especially over the past two years, is facilitating funerals and guiding family members through grief. Standing by his community at their happiest and most painful moments, Perlman is motivated by the concept of mitzvah, a religious commandment to do good deeds. “If I can make the world that much better… then I feel like I’ve accomplished something… that’s my goal of the day,” Perlman avows. 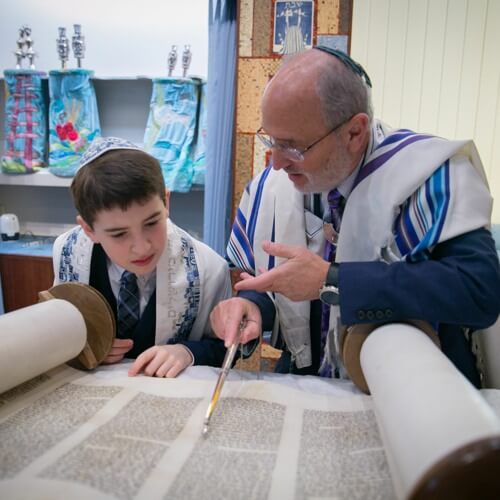 Dedicated to his community, Perlman is always available to his congregants. His duties as Rabbi are his calling, and “when you’ve taken a calling and somebody calls you at two in the morning because their mother is dying or they’re sick or they don’t know what to do… you don’t get upset… It’s part of the deal you made when you took on this responsibility.” His focus, in all areas of his role as Rabbi, is supporting the people in his congregation.

In tandem with his role at Temple Ner Tamid, Perlman is an active member of the Peabody community. He works as a community chaplain for the Peabody Police Department, assisting the critical crisis intervention team and supporting the men and women of Peabody’s police and fire departments. Part of Peabody’s Interfaith Community Dialogue Planning Committee, Perlman also facilitates a community dialogue program, which aims to foster community communication. He also travels across the United States and Israel with his brothers as the Cantors Perlman, performing everywhere from Yad Vashem to PBS.

Balancing a full schedule, Rabbi Perlman began using PlanHero for Temple Ner Tamid’s weekly Haftarah. Easy to share with his congregation, PlanHero’s Signup Tool allows congregants to sign up to read when they are available, freeing up the Ritual Committee at Temple Ner Tamid from back and forth calls. “Boom, done, finished!” When a congregant calls Rabbi Perlman now, upset they weren’t asked to read at that week’s service, Perlman can say “you can’t say nobody asked you… we ask you every week to sign up!”

With one less burden on his plate, Perlman can focus on leading his congregation in prayer and making the world a better, kinder place, one day at a time!

For more, check out Temple Ner Tamid’s website and the Cantors Perlman.

Samantha Scheinfeld is a Customer Success Specialist at PlanHero. Originally from Chicago, she is a graduate of the University of Southern California.

Build Your Church Community with our Signup Tools

Build Your Church Community with our Signup Tools

Top 10 Ways to Use the Signup Tool

Top 10 Ways to Use the Signup Tool