by Jennifer Hillman-Magnuson - in Brain Fog

Their Has to be a Better Way: Avoiding Common Grammatical Pitfalls 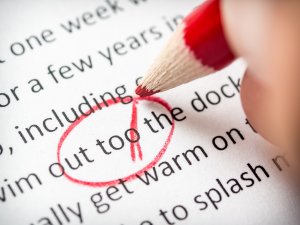 We’ve all been there. Maybe it was a friend’s social media post, an online article, or – gasp – something you wrote yourself and didn’t adequately proofread. Obviously, as an editor, my internal cringe factor kicks in when I come across some of the more common mistakes. If I had a nickel for every misuse of too/to and their/they’re/there, I could supply every person in my neighborhood with their very own copy of Merriam-Webster’s latest. The fancy kind, with leather bindings.

Whether it’s an unnecessary apostrophe (the do’s and don’t’s of online dating), a superfluous letter L (I like reading books allot), or the most egregious use of the possessive your in place of the contraction of you and are (you’re), poor grammar sends a message. Hint: it’s not a positive one.

Grammatical mistakes give the reader the impression the author is careless and possibly not fully vested in the content. Worse, it can convey a lack of intelligence, despite the fact even the smartest people are rarely skilled grammarians. This applies to personal and professional social media, company emails, white papers, school papers, or anything being shared with others (although of course, even private writings should strive to meet the same standards). And, just as importantly, it distracts from the content. Maybe it’s not the end of the world if you wish a neighbor congradulations on their new house. Send the same message to your CEO via LinkedIn? A great way to inadvertently stall your career.

Not everyone is a grammar whiz, and homophones can mess up the best of us, but with today’s technology, it’s easier than ever to write well. What are the most common pitfalls and how can they be avoided?

3. To/too. Bless its heart; I believe this is the hardest one for most, especially using social media as a litmus test.

6. While I could go on for days, I think I’ll end with incorrect word usage. When in doubt, look it up. For decades I misused nonplussed with brazen confidence. I confidently believed it meant bored or unperturbed. In standard use, it means surprised and confused. When I was enlightened to its true meaning, I was at last truly nonplussed. However, thanks to many confused writers such as myself, North American English has started to embrace this new use. I feel like a bit of a trailblazer. Some more:

As tempting as it is to list additional offenders, I’d like to pause and offer some solutions that apply to everyone; even professional writers need these tools at times, along with a well-worn copy of a style book.

On a final, very personal note, be cautious when using the dictation feature on your phone. Several years ago I was doing what busy moms do: sitting in my car at the school pick-up line, trying to cram in a few last-minute emails before the kids arrived. One day, one terrible day, I was responding to an email from my publicist who had recently procured a spot for my book on a prestigious list. I wanted to thank her immediately; I was so honored and knew once I got home, the after-school chaos would mean writing the email much later. From a distance, I could see my children exit the school. So I pressed the little microphone icon and dictated my email response and quickly hit send. I did not read over my email for errors. Or content. Or any words Siri might have thought I said but most certainly did not intend to say. Without going into gory detail, I believed I was thanking my publicist for the “great publicity” she and her firm provided me. Siri, on the other hand, had her mind in the gutter and replaced the word publicity with something else. Another word, starting with the letter P but (I am dying a little inside merely remembering this) one that was a crude slang term for a part of the female anatomy.

I got lucky. I pulled my car into a parking spot and immediately issued a mea culpa. Thankfully, the creative industry can be an eclectic one, and my publicist put me on speaker so I could hear the team laughing. They had assumed it was an autocorrect fail (thank goodness for the sent from my iPhone signature at the end of mobile-generated emails) and knew me well enough to know it was an honest mistake. Had this been a more conservative company, I might have volunteered for the Mars colonization.