by Jennifer Hillman-Magnuson - in Balancing Act

Staying in Shape as an Older Mom 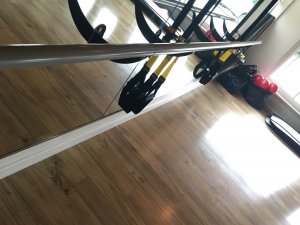 I am officially an “older mom.” It wasn’t always this way, but with five kids, it was bound to happen. When my girls were little, I skewed younger among the parents at school. It didn’t phase me much because I had so. much. energy. I was room mom in my daughter’s first grade class as well as the Girl Scout leader, volunteer art teacher, and active member of the Junior League. Oh, and I was also working outside the home. When I became pregnant with our third child, I still somehow had the energy (oh, I miss you, 30 year-old self) to show up at school with whatever supplies I needed that day (snacks for the Girl Scouts, cupcakes for the class party, 32 toilet paper tubes for the art project) with my four year-old in tow and a giant belly and not break a sweat.  I went on runs in my third trimester. And those 32 toilet paper tubes? I didn’t have them just sitting around. I purchased 32 rolls of toilet paper (probably after a run),  unraveled all of them in the school parking lot, did the art project, and used the loose TP to construct mummy costumes for my kids. I don’t know how I did it.

By the time I was pregnant with our fifth child my physical activity was reduced to beaching myself on the family room couch so frequently I created a permanent divot in the leather cushions. When I was eventually put on bed rest, due in part to my “advanced maternal age,”  it wasn’t as much a transition as a legitimatized excuse to continue forming the couch to my body. A DIY memory foam experiment, if you will.

As a young mom, I worried about being taken seriously by the other parents and whether or not our house was as nice as their friends’, especially those who had older, more established parents. Now, I worry I will be mistaken for a grandparent. I also worry about how I will get from a sitting position to a standing one after playing Sorry with my nine year-old for an hour. Sorry, but staying in shape as an older mom is no picnic.

Since we have a decade to go before our youngest leaves for college, staying in shape and feeling my personal best is a high priority and I can’t slack the way I did in my 20s. I exercised for fun back then because nothing hurt. I ran nearly every day for years without so much as a pulled hamstring. I could hot yoga and hike with a child on my back and balance on tall ladders while painting my kitchen at night while the kids were asleep because what else was I going to do? Watch a movie? Sit and read? (all things I currently consider sports, by the way). Now of course, we have Netflix and can afford to hire painters.

In my quest for a workout that would be both incredibly challenging and yet kind on my joints, and since no one will give me a varsity letter or participation trophy for bingeing The Crown, I was thrilled to discover barre method workouts after the birth of my fifth child. I was hooked. If you’ve never tried one, don’t be fooled by the graceful women engaging in what looks like simple, teeny-tiny movements while wearing $150 yoga pants. I’ve seen men who look like they could easily finish an Iron Man in-between eating nails struggle to finish a 60 minute barre session without looking like they could collapse any moment, usually with the same what just happened expression on their faces.

When we lived in the Middle East there were no barre studios, but I lucked out and found Barre3 online and was able to keep up my practice.  Barre3 is based in Portland, Oregon, so watching founder and CEO Sadie Lincoln conduct a workout from her studio in downtown Portland not only kept me strong, it helped ease my intense homesickness.

Now, I am once again living in Oregon and get to attend Barre3 classes in person. It’s addicting. It has to be – primarily for my pride. The instructors are, on average, half my age, and in phenomenal shape. I once took a class taught by a young woman who was so strong and energetic I literally hobbled out of the studio at the end of the hour. The kicker?  She was six months pregnant. That is how much I love this workout; I happily allow myself to get schooled by a young woman and her unborn child.

How about you, PlanHero Nation? How do you stay in shape as an older mom? Has your workout routine evolved over the years? Any barre devotees out there?